In this paper by Ferrer-Ugalde et al., the MOLECUBES β-CUBE and X-CUBE was used to explore the biological applications of COSAN anion−GO nanocomposites by developing a potential theranostic agent gathering high boron loading and in vivo imaging capabilities.

This GO-I-COSAN has been synthesized using a novel boron-rich cobaltabis(dicarbollide) precursor with one iodide group attached to one of the boron atoms of the cluster (I-COSAN) and designed to be subsequently labeled with radioactive 124I for its use in positron emission tomography (PET). 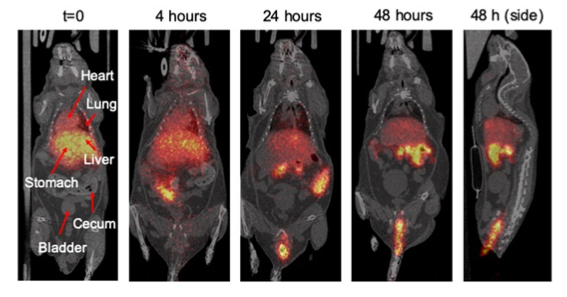 In vitro cytotoxicity studies of GO-I-COSAN with HeLa cells at different concentrations up to 48 h proved that the cell mortality was lower than 10%, indicating minimal cytotoxicity of the nanomaterial. Remarkably, internalization of the nanomaterial by cells was confirmed by transmission electron microscopy, which indicated its accumulation in the cytoplasm, without causing changes in either the size or morphology of the cells. Additionally, in vivo tests using Caenorhabditis elegans confirmed that GO-I-COSAN could be ingested by the worms, showing no significant damage and very low toxicity, which supports the results observed in the in vitro studies. Radioisotopic labeling of I-COSAN using a palladium-catalyzed isotopic exchange reaction with Na[124I]I and its subsequent functionalization onto GO was performed successfully, leading to formation of the radioactive nanocomposite GO-[124I]I-COSAN, which was quickly injected in mice. PET images at different times revealed excellent in vivo stability of the developed nanomaterial. No activity in thyroid and stomach was observed even at long times, proving that iodide did not detach from the material. GO- [124I]I-COSAN presented a favorable biodistribution profile, being mainly accumulated in the liver and slightly in the lung, with a long residence time on blood and progressive elimination via the gastrointestinal tract. It is noteworthy that the high boron content of this material paves the way toward theranostics because it benefits of a traceable boron delivery for boron neutron capture therapy.